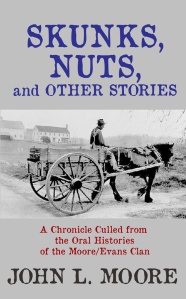 As a boy delivering newspapers after school, author John L. Moore once found a copy of Playboy magazine on the grass beside the sidewalk. In “Skunks, Nuts, and Other Stories,” he details the dilemma that picking up the magazine created for him.

Moore’s collection of two dozen yarns told by and about members of his extended family reveal the humor, sadness, heroism, resourcefulness and resiliency that his family members experienced in dealing with the world around them. Without meaning to, they sometimes took part in historic events and had chance encounters with famous people.

Its real-life characters include: an aging Vietnam veteran who refuses to forget his long-dead comrades; an uncle telling about his great-grandfather’s Civil War trophies; a teenage girl selling cookies to buy groceries for her younger siblings during the Depression; and a father who plays Santa Claus for his son’s Kindergarten class.

About the Author:
John L. Moore, a veteran newspaperman, said he employed a journalist’s eye for detail and ear for quotes in order to write about long-dead people in a lively way. He said his books are based on 18th and 19th century letters, journals, memoirs and transcripts of official proceedings such as interrogations, depositions and treaties. The author is also a professional storyteller who specializes in dramatic episodes from Pennsylvania’s colonial history. Dressed in 18th century clothing, he does storytelling in the persona of “Susquehanna Jack,” a frontier ruffian. Moore is available weekdays, weekends and evenings for audiences and organizations of all types and sizes. Moore has participated in several archaeological excavations of Native American sites. These include the Village of Nain, Bethlehem; the City Island project in Harrisburg, conducted by the Pennsylvania Historical and Museum Commission during the 1990s; and a Bloomsburg University dig in 1999 at a Native American site near Nescopeck. He also took part in a 1963 excavation conducted by the New Jersey State Museum along the Delaware River north of Worthington State Forest. Moore’s 45-year career in journalism included stints as a reporter for The Wall Street Journal; as a Harrisburg-based legislative correspondent for Ottaway News Service; as managing editor of The Sentinel at Lewistown; as editorial page editor and managing editor at The Daily Item in Sunbury; and as editor of the Eastern Pennsylvania Business Journal in Bethlehem.

Advance Praise:
“From the Revolution to the 20th century, John L Moore’s family tales are humorous or poignant, capturing how the family connected to the world, the lessons learned, and the connections made to eternity.” — the Publisher