Sunbury Press: You started your career at a very young age and have many talents. Can you share some of the talents you apply to your blossoming career in movies, commercials, and your  everyday life? 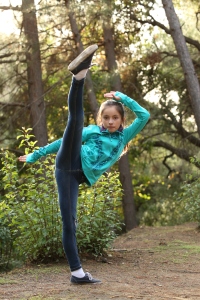 Paris Bravo: Martial Arts, Weapons, Stunt work and Dancing have been crucial to being successful in this industry. I have booked many jobs with those skill sets. My parents have made me very well-rounded by playing several sports like: basketball, soccer, softball, flag football and CHEER. I am also learning guitar, cello and piano. Being an athlete has helped me in my everyday life by being focused, fit and has made it easier to work on roles that require a ton of energy.

SP: The Cursed Man movie is a psychological suspense thriller with some horror elements. How did you feel about playing in a film of a dark nature?

PB:  At the time I had never worked on a dark theatrical role. It was a new challenge and has helped me in obtaining other roles. I thought it was pretty cool to be a part of such an amazing role…especially a novel turning into a movie. Some of the scenes were pretty scary for a kid but I could not wait to find what would happen in the next scene.

SP: In preparing for your role as Michael’s daughter (Ian Watson), what sort of preparation did you have to go through to understand the character you were playing?

PB:  I prepared for the role by reading the book with my parents to learn the acting style/genre. I also worked with Ian Watson to get a feel for him as my dad. I also envisioned something happening to my parents to make the role more believable.

SP: Do your parents help you in anyway in giving you advice in ‘how’ they think you should approach the way you act or portray certain characters?

PB: Yes, my parents help me a ton. We run lines and we all give our opinions. We all become the characters and pick the scene a part. On occasion I have had to hire an acting coach to assist and guide me in the right direction of what the Director is looking for.

SP: What is the most memorable moment for you in the filming of The Cursed Man?

PB: The most memorable moment for me was when “Duppy/Dr.Anna Lee began to choke my “Mom” in a scene. At first it really scared me, it was so intense. Then they were all done and everyone was laughing.

SP: If fans wanted to connect and follow you, please let them know how and where they need to go.

SP: The premiere is taking place at the Alex Theater in Glendale, CA. The theater is large and seats 2,500 people. What are your thoughts on the location of the premiere, the capacity and the idea that it is taking place on Halloween night?

PB:  Having it on Halloween Night will make it even more COOL! This movie is dark and scary, PERFECT for Halloween. The location is beautiful and I cant wait to see the final product.  I hope to see Mr. Rommel there. I was born in Orlando, FL and moved to Los Angeles at age 7 1/2 to follow my dreams. I am excited for the premier. Do we come dressed up in fancy clothes or shall we come in masquerade?

SP: Out of all the special talents you have, pick the one talent that you think expresses who you are as a person the most.

PB:   I think that Martial Arts is the one talent expresses who I am the most as I am strong, confident, respectful, communicate well, I am dedicated, I persevere and learn multiple steps very easy. Martial arts helps keep up my competitive edge.

About the Premiere:
World Premiere of THE CURSED MAN movie – Alex Theatre in Glendale, CA. Halloween Night October 31, 2016 – 7pm to 11pm – Party before and after. This may be the greatest movie premiere on Halloween Night in the History of the Alex Theatre.  For more information about the venue, please see: http://www.alextheatre.org/

About the Book:
Alister Kunkle believes death is in love with him.  A simple smile from friend or stranger is all it takes to encourage death to kill.

With his family deceased and a path of destruction behind him, Alister sits inside a mental institution, sworn to silence and separated from the rest of the world, haunted by his inability to escape death’s preferential treatment.

But when a beautiful psychologist arrives at the institution and starts offering him care, Alister braces himself for more killings. When none follow, he tries to figure out whether he truly is insane or if death has finally come to him in the form of a woman.

About the Author:
Keith Rommel is an award-winning author of ten novels and is an award-winning screenwriter. His writing has been called, “Horror for the curious mind.” His first two novels, The Cursed Man and The Lurking Man are at various stages of production to become motion pictures. 2016.

Alister Kunkle believes death is in love with him. A simple smile from friend or stranger is all it takes to encourage death to kill.

The special edition movie premiere cover are only available through October.
For more information about the novel, please see:
http://www.sunburypressstore.com/The-Cursed-Man-PAPERBACK…

For more information about the movie, please see:

One thought on “Young actress Paris Bravo, of "The Cursed Man," interviewed by Sunbury Press”